Early reports estimate that 120,000  attended the 2018 Women’s March in New York City, less than a third of last year’s turnout, but the ideals and anger were no less powerful. END_OF_DOCUMENT_TOKEN_TO_BE_REPLACED 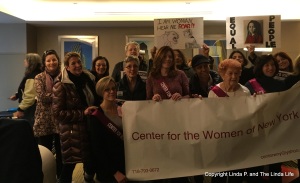 I attended the Women’s March on New York City with a friend and the Center for the Women of New York. We assembled in a midtown hotel lobby where I bought a commemorative pin and sash from the Center; they need the money and I wanted a memento that I can use again. I helped myself to complimentary coffee as added fuel. END_OF_DOCUMENT_TOKEN_TO_BE_REPLACED