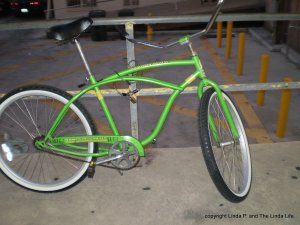 I’m astounded that so many people won’t comprehend that they cannot use pictures and illustrations that they just find on the Internet. The thinking is that if they see it, it’s free to use as they see fit.

These pictures each have monetary or intrinsic value. Whoever posted the image, or shot the image, or legitimately shared the image, saw something special about it. They deserve to be asked before reuse.

Here’s an analogy: Let’s say someone took off with a pretty bicycle that I built. Their argument is that they wanted a bike so they chose mine. But that’s still stealing something that I created. If I used that bicycle to earn a living, perhaps as a delivery person, then the thief took not only my wheels but my means to earn money.

What if the potential thief first asked permission to use the bike? I would have the option of lending it out for free or renting it for an agreed-upon cost. Now that is a legitimate transaction and everyone wins.

There are several sites that offer free photographs. I generally don’t get into that, preferring to use my own.  I don’t think I’ve had a problem with photo theft yet but with so many people thinking it’s acceptable to copy/paste whatever visually appeals to them, it’s just a matter of time for every content creator.

There are no easy solutions. You can sue but the legal fees would be too high to make it worthwhile. I do place a copyright on everything I use on the blog. My metadata states that permission must be obtained before use but I do wonder if anyone heeds those instructions.

All I can do is create a blog post that, hopefully, would prevent someone from stealing some person’s art.  Social media and the blogosphere have some beautiful photography that needs to be respected.